1. The Texas Latino GOP PAC released today a Texas poll conducted in 5 of the largest urban counties in Texas, among 500 Republican Primary voters, which was designed to test a new GOP approach for campaigning for the Hispanic vote in 2020 and to identify Democratic reform proposals that should be the top targets for Republicans to campaign against in 2020.

In the spirit of Fiestas Patrias and Hispanic Heritage Month this poll identifies an independent theme for Republicans to campaign for the Hispanic vote in 2020.

This poll calls for a “Beyond the Wall” strategy for use by Republican candidates and it is based on giving legal status to undocumented immigrant families, who have lived lawfully in Texas, for 7 or more years. This “Family Stabilization Proposal” is not citizenship and, thus non-voting, but allows those illegal immigrant families to gain a legal residence in the United States that provides human dignity without any constraints or prejudices.  This new approach for the GOP widens the conversation, which in the recent past, was only a debate between building a wall on the border or amnesty for all those illegal immigrants who “cut in front of the line” and entered into the U.S.

QUESTION 6. Thinking about those illegal immigrants families who have been living in the us for more than seven years lawfully, and have clean records, should they be given [1] the right to vote with citizenship status, or [2] only be given legal resident status and not allowed to vote?

2. This Republican Primary voter poll also reinforces the belief of many Texans today, that undocumented immigrants into Texas only really want jobs to provide for their families and not necessarily to gain citizenship and the right to vote in U.S. elections.

QUESTION 5. And again, based on everything you’ve seen, read or heard recently, do you think illegal immigrants who have come to the United States (1) are only seeking jobs but are not interested in becoming u.S. Citizens or do you think they are coming to the us (2) for political reasons and want citizenship?

3. This “Third Way” of non-voting legal status for illegal immigrant families demonstrates the Republican candidates can enter the immigration reform arena with a strong majority behind them (57% of all Republicans), but also know that only 17% of Republicans are against any reforms and could be considered anti-immigrant. We believe this is a strong turn-around for Republican Party members from the previous generations in Texas and gives the GOP a navigable path to discuss, debate and promote solutions to the Immigration stalemate.

The top attack themes against Democrats on the immigration issue for 2020 were identified in this poll as the following:

Question 7. Democrats in Congress are pushing more lenient changes on immigration. Which of the following Democrat proposals bother you the most, if you had to pick just one? 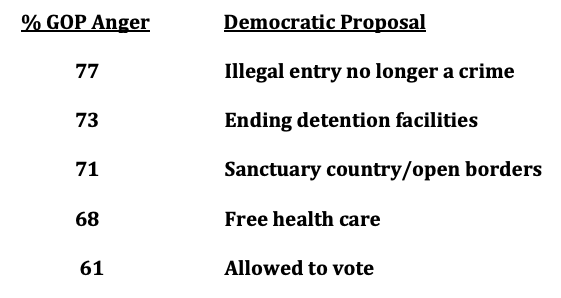