New state- by- state population estimates released at the end of 2019 in advance of the 2020 US Census count showed more signs that Southern and Western states will gain new political power when the 2020 Census is finalized (the next census count begins on April 15, 2020 by December 15, 2020).

The “where” is important because in the states where the population has geopolitically shifted, the Hispanic vote is set to be the swing vote in many of them. The number of U.S. House seats is set at 435, so if some states have lost population relative to others ( and now have lost House seats for the next 10 years), it also means other faster growing states will gain U.S. House seats and increase their relevant political power for the next 10 years1.

The chart below shows where the political power has shifted towards states with strong Hispanic populations, such as Texas, Florida, and Arizona. 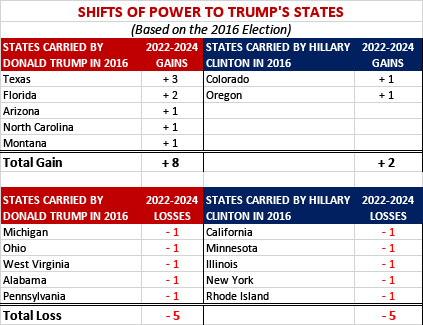 The U.S. House seats and subsequent electoral college vote losses in Trump states (Red) and in the Hillary Clinton states (Blue) totally offset each other. The big gain from these U.S. Census data estimates show that the 2016 Trump states will have a more distinct advantage by 2024 (a net of +6 ).

With California, New York, and Illinois losing electoral votes for 2024, the shift becomes even more important. In most of the states that have positive-shifted, the Hispanic vote will be a crucial component of the 2024 Presidential election and perhaps for the control of the U.S. House of Representative in 2023 . 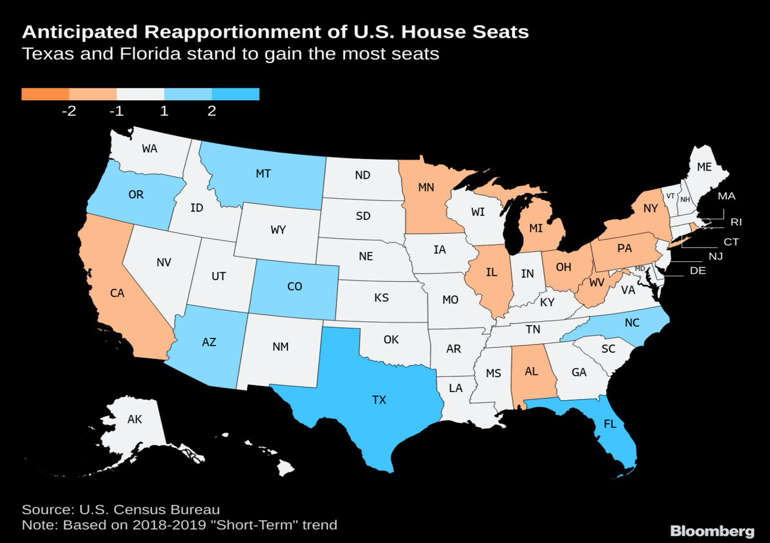